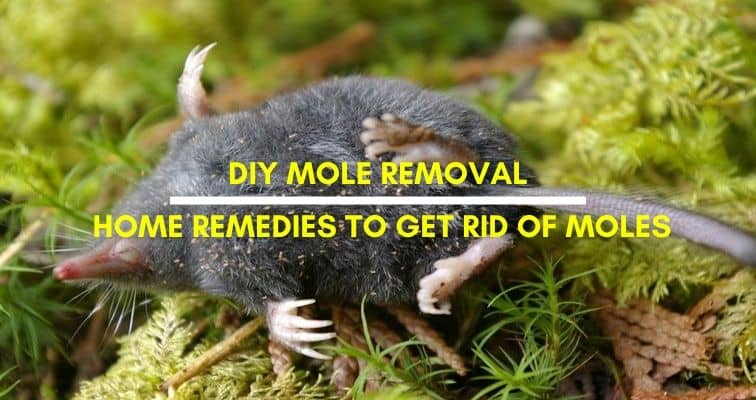 Moles are a kind of underground garden pest that are sometimes difficult to spot and eradicate. The underground tunnels they dig a can be disastrous for lawns and gardens even though these little animals help rid the yard of insects.  You may never know if your garden is infested with a mole because they move about underground and only come to the surface when there is a need to find a mate.

However, their tunnels are easy to spot and are a useful indication that these pests have invaded your property.  In most cases, the tunnels can reach as deep as one-foot whilst kicking up dirt in large visible mounds.  The underground mole tunnel can span the length of your garden, crisscrossing in multiple directions. 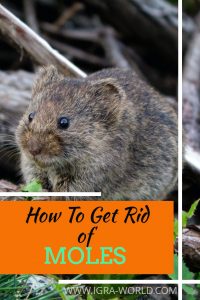 The inherent physical characteristics of a mole make them very easy to spot once out in the open. They have prominent hairless pink snouts, webbed feet, and long claws that are used for burrowing activity.  They may grow to as long as 10 feet, covered with dark or grey fur. The eyes and ears are barely visible because they are covered in fur, which makes them look a bit creepy. 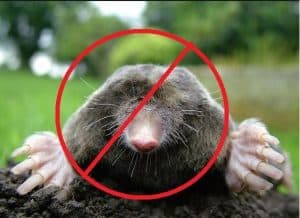 Eastern Mole:  The Eastern mole as the name implies can be found along the eastern coast from Florida to New England. They grow to about 7 inches excluding the length of their tails.  They prefer to dig tunnels in open yards, fields and require moist sandy soil. 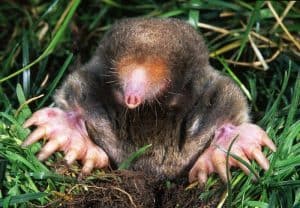 Star-nose Mole: The main distinguishing feature of the star-nose mole is the star-shaped snout which the animal makes use to prevent soil and dirt from entering its nose. They prefer moist-to-damp soil and can be found throughout the northern U.S and Canada.  They also grow slightly larger than the average 7-inch. The fur on the body of a star nose mole can be anywhere from dark brown to black. 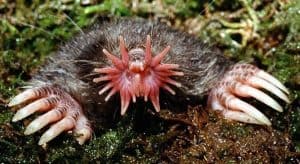 The America Shrew Mole: The American shrew mole is the smallest of the lot growing to an average of 5.5 inches excluding the tail section.  Their noticeable presence is felt throughout the western U.S. It strives in moist soil that is easy to dig and temperate areas with lots of rainfall. They are very active during the day and are notorious for traveling in groups. 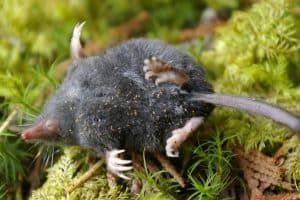 Major Difference between a Mole and a Vole 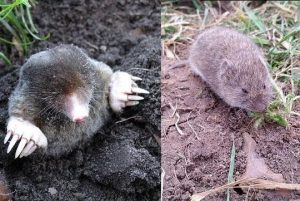 The prominent forearms of moles are a major distinguishing feature that allows moles to make tunnels underneath the yard. Voles on the other hand look a lot more like mice without the definable eyes, ears, and forearms of moles.  Additionally, while the fur on moles is grey to black those on voles are usually brownish.

Voles feed on fruits, grasses, and other plant life and can be grouped as herbivorous animals while the diet of moles consists of insects.

Apart from the American shrew mole, many moles are solitary creatures preferring to hunt and live alone while voles move in clans and groups.  Finally, it can be a very troublesome pest to deal with because in addition to their burrowing activity they also feed on vegetation.

Home Remedies to getting rid of Moles

If an unsightly raised pattern or grass and broken earth are a regular occurrence in your garden, there may be a mole underneath.  The classic signs of a yard that has been infested my moles are underground tunneling and mounds of dirt here and there. So if you notice these signs, it’s time to take proactive measures to save the yard.

Here are some practical steps homeowners can do to get rid of troublesome moles.

Make use of Mole Traps 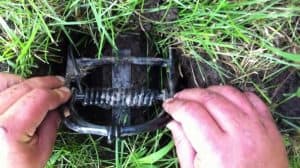 One of the most effective home remedy methods of getting rid of moles in the garden is by making use of mole traps.  However, there are several important factors to consider before using a trap to catch moles. These include:

Here are a few trap types to consider:

Spear type traps: The spear type traps are potentially dangerous for kids but they are the most common traps found in any hardware store because of their effectiveness.  The pointed out spears are a particular problem so parents are advised to be wary with unsupervised children. 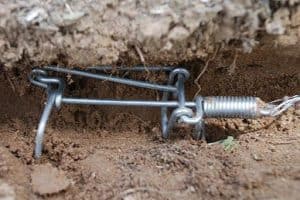 Out-off sight Traps: This type of trap is safer to use than the spear type trap but it is trickier to set properly.  You can purchase it in any hardware store.

NoMol Traps: While the NoMol traps are not as common as the first two traps, they are indeed one of the safest traps to use.  The trap sits below the surface of the earth into the tunnel of the mole.

If you have been using traps without any success then there are probably two reasons you haven’t caught any mole. The first reason is that many people fail to place the traps in the right spot. In other for traps to be effective, they must be placed in the burrowing tunnels made by moles. The second reason is that many homeowners set only one trap at a time whereas to be successful at eliminating moles you need to set many traps to increase your chances of catching moles.

Eliminating the Mole’s source of food

Another source of food for moles is insects but they are not as popular as their number one source of food “earthworms”.  Many homeowners fail to realize that even though they are successful at getting rid of insects, earthworms cab still serve as food sources that allow them to strive.

The strategy of controlling the mole’s food source as a means of keeping them in check is a very tricky thing to do because of the variety of diets available to the moles.  The only way to eliminate the sources of food for moles in these cases is the use of chemicals and poison which are generally tagged as unacceptable by many people.

Since moles are known to dig deeply into the soil the traditional fence barrier around your house will not suffice as a preventive measure.  However, specific barriers around key areas like the garden and plants may keep moles away from tearing up roots and grasses.

You can use either gravel, wire mesh, or wire cages for the fence and it must be at least 5 to 6 inches deep.

Moles need soils that are moist and easy to dig through with all the necessary food sources for survival and sustained growth.  If you are successful at reducing the moist of the soil using proper drainage, you may discourage moles from calling your yard a home. However, many homeowners with gardens will kick against this approach because over draining the soil can be detrimental to garden plant life.

Use a Mole Repellent

Although the use of a mole repellent is the least effective means of getting rid of moles in the garden, they can help to prevent moles from getting into the garden in the first place. If you are already dealing with moles in and around the house, the repellent will at least help prevent them from gaining access to a huge part of the garden.

The use of castor oil is one of the best home remedies repellent that can be used to prevent moles from digging tunnels and setting up mound hills in the garden.  You can either buy castor oil in stores or make yours at home.  The castor oil from stores is normally mixed with other offensive ingredients that are targeted at preventing moles.

To make yours at home; add 6 ounces of castor oil to about 2-3 gallons of water with 2 tablespoons of any good detergent. Apply about 1/6th of this solution for every 1,000 square feet of soil.  It’s a very good idea to spray or water the soil just before it rains so that the oil has time to soak into the soil. 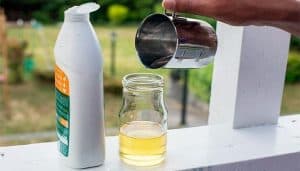 Finally, there are sonic mole repellents that make use of high pitch sounds to drive moles out of the yard.  Moles find the sonic vibrations very uncomfortable so we will ideally run away from your garden or yard to a peaceful area.  Vibrations from a sonic device aren’t audible to humans so they pose no threat to kids or adults.