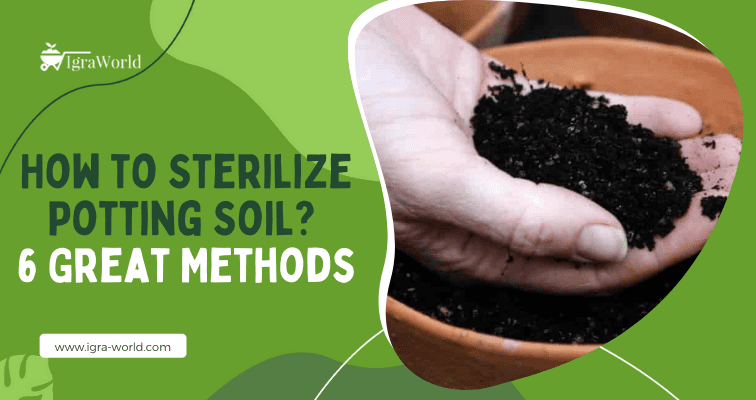 For those of us who enjoy gardening and having indoor plants, you need to learn how to sterilize potting soil. Some people might discourage you against sterilizing your homemade potting soil because of various reasons. However, please don’t listen to them, unless you want to have creepy bugs and pathogens all over your house.

You’ll be forgiven for having thought that soil should be dirty, the truth is that using clean and sterilized soil will do untold good to your plants. Sterilizing potting soil may sound like a sophisticated thing to do but trust me, it’s not.

Hoping you are a DIY enthusiast and gardener who minds their budget, in this read you’ll get a number of methods on how to sterilizing your potting soil. But, first things first.

What is Soil Sterilization?

This is a process whereby farmers/gardeners sterilize their soil to control or reduce soil borne pests, insects, pathogens and weeds. It’s a way cheaper process than potentially losing an entire plant. Soil sterilization plays a critical role during seed germination and it’s worth investing in for its large benefits.

Reasons why you Should Sterilize Potting Soil

Truth be told, sterilized potting soil isn’t perfect. As a matter of facts, you won’t get the optimal best possible plants with it. However, you don’t want to cope with those creepy crawlies out of unsterilized soil, isn’t it? Obviously, there are pros and cons of soils sterilization depending on the method used. Ensure you follow the required procedures to minimize negative outcomes.

The following are the materials you’ll likely need for most of the soil sterilization method here-under:

How to Sterilize Potting Soil?

As there is more than one way to skin a cat, there are also a number of good ways to sterilize potting soil. Whether you have some soil from your garden of just bought some potting mix from a store, always sterilize it before planting.

Choosing the right method to sterilize potting soil highly depends on the amount you’re working with and how fast you want the process done. Use any of this methods, the end justifies the means.

That’s quite simple, right? The hot water sterilizes the soil by killing any insects therein together with their eggs. Your soil is now good for planting.

Secret Sauce: You can use this method alongside freezing. Freeze the soil for about five days and then sterilize it by pouring the boiling water over it. We encourage this method to ensure you completely kill the insects and pathogens thus making your soil completely safe for use.

This is an equally effective method of sterilizing potting soil.

This will kill any unwanted organisms in the soil mix. Ensure you allow the sterilized soil to cool before handling, in order to avoid any burns.

After it is completely cool, store it in clean plastic bags or store it in the foiled containers until when you are ready to use it for planting.

Sterilizing potting soil using this method is quite easy. However, you may need to do it in an open space, else the smell might not be that appealing for your house. Covering the pan with the foil also plays a big role in containing the odor.

The only disadvantage of this method is that overcooking the soil can produce poisonous components that can cause harm to your plants.

I bet you didn’t know that you can use a microwave to sterilize soil. Well, now you know it.

Note: Your house may have an unpleasant smell afterwards. As with the grill method, you can use a meat thermometer to ensure its heat doesn’t surpass the recommended temperature.

Chemical sterilization is used in large scale agriculture. We wouldn’t recommend using chemicals for sterilizing small-scale soil. Why? Because the usage of chemicals not only put your health at risk but may also affect your plants.

Most chemicals also have compounds that may require you to leave your soil unplanted for a specified period before it’s safe for planting. You don’t require that especially if you were in a ‘hurry’ to plant, isn’t it? Anyway, if chemical-free methods of soil sterilization are equally effective and probably cheaper, why put your plants and your own health at risk?

Evidently, this method is not for the impatient lot. It may take up to six weeks to completely sterilize you soil. In cloudy weather conditions, that may go up to ten weeks. So if you opt for this method, be patient.

Major drawbacks are the long duration and the hefty costs incurred in purchasing the plastic.

What to do after Sterilizing Potting Soil?

When it’s all said and done, don’t be one of those people who re-use potting soil without considering the effects of the many pathogens, fungus and insects that it may contain. Please note that even fresh potting soil from the store could be contaminated. Therefore, always ensure you use any of the highlighted methods to sterilize potting soil. This will eradicate all the unwanted organisms and weeds from your soil thus optimal benefit to your plants. Your plants will thank you for this.

1 thought on “How to Sterilize Potting Soil? – 6 Great Methods”