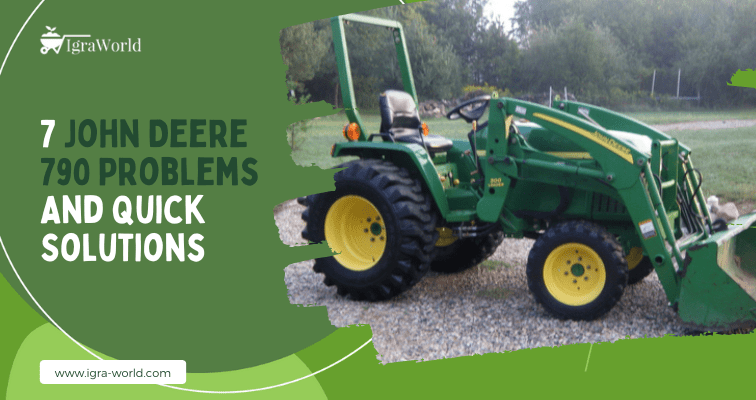 The John Deere 790 is a popular utility mower that delivers the right amount of power to tackle general farming and ranching needs. This John Deere tractor can handle the most demanding tasks thanks to its dynamic diesel engine, high-capacity lubrication system, and cast-aluminum pistons. And all these features come at a very affordable package.

Nevertheless, besides experiencing some great features, users can encounter several problems with the John Deere 790. These problems may include:

This article will explain all the possible issues along with their solutions. So let’s find them out!

This fantastic unit delivers 27 horsepower, making it perfect for general farming work. Users appreciate its user-friendly conveniences, like the roll-over structure protecting you from accidents and seats which flip forward.

However, consumers have reported several issues with this model. We will take a close look at them below.

Most consumers have reported having encountered this issue while operating their John Deere 790 mower. And it can be catastrophic to experience when you are all set to begin your daily farming work.

Although several factors contribute to this issue, most are related to general maintenance practices and good habits. However, a key cause can be the incorrect position of the transmission gearshift lever.

Other possible causes include the following:

Check the battery to make sure it is not drained. Also, check the connection points for corrosion, as it can hinder the power circulating ability of the system.

You can easily clean the connection points with a wire brush and manually tighten them.

Next, inspect the fuel shut-off valve to see if it’s open. The valve often stays engaged, preventing fuel from inundating the engine during transportation. So make sure to disengage it after the mower is ready to use.

After that, you should check the fuel level to ensure it’s adequate and not too stale or old. Stale or too old fuel will appear clumpy and murky than fresh fuel. If it is so, add fresh fuel.

Other things to look at –

The John Deere 790 is a fantastic unit for light to medium lifts and general jobs. So such a low-powered loader can wrestle with more demanding work.

Users have even complained that they faced trouble with maintaining the loader bucket’s angle. If it’s not correctly set, re-attach the bucket after removing it. You can hire a mechanic, but you can try to do it independently by following the steps below.

You have successfully removed the old bucket. Now, follow the below steps to set the new one –

Another issue that may crop up while using the John Deere 790 mower is that the engine isn’t getting an adequate flow of oil. Eventually, the engine doesn’t receive enough power to run flawlessly.

A key cause is that while the engine remains shut, the debris accumulates in the oil filter that must be cleaned. Another possibility is that the fuel line has a small pinhole. And when the vacuum elevates, it sucks in the air.

Check the lift and injector pump. The John Deere 790 model comes with its tank on the top, and you must ensure it doesn’t have debris. So empty the tank and then remove it to clean the filter. After disconnecting the filter lines, blow compressed air via them.

Pull a vacuum after plugging that line to check if it held. If it doesn’t, the line has a pinhole.

Following a similar process from the injector pump to the tank, check everything is good in the pump. This should fix the fuel problem.

If not, there must be some issue with the injector pump. In that case, you will need a few specialized tools to inspect it, so you may have to seek professional help.

The John Deere 790 tractor can even show up minor electrical problems. For example, damaged parts or bad switches.

However, there is usually nothing to fret about these electrical issues as you can easily deal with them with basic electrical knowledge.

To circumvent the electrical issues, the key is to service the unit monthly. Eventually, you can detect damaged components that need a quick replacement, preventing failure at any inconvenient moment.

Some users even faced problems like the mower wasn’t moving reverse or forward or smelling like the drive belt was heating up. So these are most likely due to problems in the drive belt.

After reinstalling the deck, secure all the connections, the deck bracelet, and the right suspension arm. Next, inspect the belt running on the mower deck and adjust it if needed. Finally, lower the hood after reconnecting the spark plug wire.

However, you can quickly call the dealer to resolve the drive belt issue.

Your John Deere 790 mower can unexpectedly stall in the middle of the work. The primary cause behind it is clogged valves or fuel filter issues.

You have to check the entire fuel system meticulously. Generally, you can prevent such issues with proper and frequent maintenance and cleaning filters and valves.

Fitting areas can become loose over time, causing leakages. This may not be a catastrophic failure, but it can result in unusual delays in your busy schedule. At the same time, you try to fix the problems.

The best solution is to keep maintaining your John Deere 790 machine. However, you may need to do more maintenance, especially if your machine is a few years old or is second-hand.

Try to check the mower thoroughly at least once every month to detect any leaks and resolve any commotion in no time. Prevention is the golden rule to deal with any tractor problems.

The John Deere 790 is a very economical lawn tractor by John Deere that can smoothly mow nearly 3 to 4 gallons for 5 to 6 hours. Moreover, this robust little machine is ideal for small, tight places.

Homeowners with 1 to 10 acres can purchase this tractor with a short wheelbase. However, a few downsides include an under-engineered front end and no backhoe.

Overall, the John Deere 790 is a budget-friendly lawnmower, suitable for those with small acres of land.

John Deere has designed the 790 models for general use. It packs a low-powered engine and many other features intended for general use. So if you intend to purchase a tractor that requires general maintenance and won’t break the bank, go for it.

Coming to its problems, you will likely find the same issues on other tractors too. And now that you know this mower’s problems and their solutions, you can easily fix them.

However, try to keep up the regular maintenance of every part of the tractor to prevent problems as much as possible.

What is the weight of the John Deere 790?

How to check the hydraulic fluid on the John Deere 790?

You have to detach the cap from the reservoir that is typically present behind the driver’s seat of John Deere mowers. Then, remove the dipstick and check the fluid level.

Add fuel to the reservoir slowly, if required using a clean funnel.