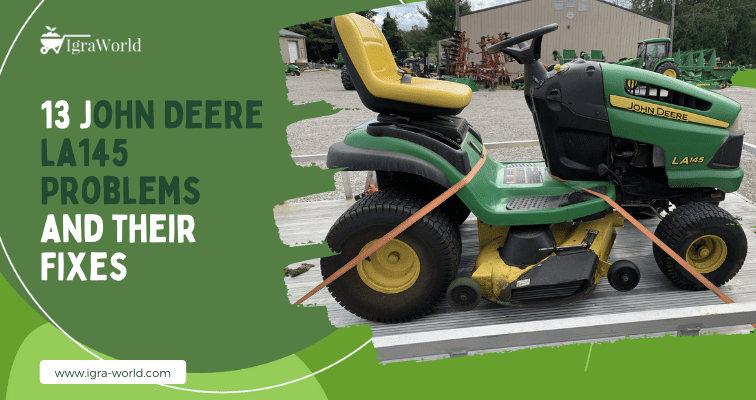 The John Deere la 145 is large and powerful in its execution. It is more commonly used for commercial gardening. Its engine functions at a range of 22 horsepower, which is generally more than most other tractors. The cruise control is decent, and the two-pedal hydrostatic transmission allows the machine to shift easily. The fuel tank can hold 4 gallons of petrol. The tires (front and rear) have a diameter of 20 inches, which means that the tractor is comfortably operable without the risk of slipping. It can be easily maneuvered around nooks and crannies as the turning radius is only 18 inches.

It is a tractor in the LA 105 series, which was primarily in manufacture between the years 2008 to 2010. The power system of the tractor holds a Briggs and Stratton air-cooled gasoline engine of the dimensions of forty cubic inches and a cylinder bore of 2.97 inches. The maximum forward speed is 8.8 kilometers per hour, and it is equipped with a manual steering system and wet disc brakes.

Beside being equipped with so many features John Deere LA145 has some serious issues as well, they are:

Problems With The John Deere La 145

Some of the major problems with the John Deere La145 are mentioned below:

1. Starting Problems In The Engine

The engine can take a long time to start, even with a full choke. Alternatively, after running for about thirty minutes, it would stop working.

Other ignition problems can include the engine starting for a few seconds and then shutting off. The gas tank outlet tube might be plugged and smell gassy.

Try replacing the fuel cap or the fuel pump. The vacuum in the tank robs the fuel and stalls the engine. You might see if it works after taking off the fuel cap. Alternatively, a new fuel pump may be required to take over from the choke once the vehicle has started.

If the engine starts for a couple of seconds, you must ensure that the air filter is clean. In case it has become clogged, you may need to replace it. Other measures could include checking if the gasoline level is low or improper grade fuel is being used. The spark plug wire might have come loose, or there might be poor cylinder compression.

The engine might be using too much oil. The power which the engine receives is too low for operations. There are noises from the engine, and it appears to be getting knocks.

New seals or gaskets need to be procured. Servicing might be required for the cylinder liner or the plugged breather pipe.

In case of low engine power, the carburetor might require adjusting. The push rod and cylinder block might need replacing.

For noises from the engine, try reducing engine load, filling up oil as per requirement, adjusting idle speed, or changing the fuel pump.

There can be a variety of reasons for this problem.

The machine may start emitting blue smoke and lose power. It will eventually refuse to take charge. The problem might happen during the initial days after purchase or the break-in period of the vehicle.

The mower might also be consuming oil in the initial period. This can lead to an abnormal amount of smoke from the exhaust, as the engine burns oil and gasoline.

In case the air and fuel are not present in appropriate proportions, the machine will bellow black smoke. If the carburetor is dirty inside, black smoke might be released.

A leak-down test will have to be performed, which will determine the cause. The problem might be with the piston ring, or the valve guides might be worn down. Oil might be seeping past the piston rings, where the engine ends up burning it along with the fuel. The deep internal components require replacing.

If air is not present in the correct measure, the air filter might have to be replaced. You can try cleaning it with warm soapy water.

The mower turns hot, and the transmission slips. The mower will refuse to move.

One of the causes for this problem can be that the idler pulley has melted. If indeed this has happened, the engine will break down.

The transmission might have to be exchanged for a new one, which will likely be expensive. The idler pulley needs to be replaced if it has melted. If the idler pulley has been leaking grease, you can try putting oil on top of it.

The fuel is not being properly distributed across the machine. You need to pour more fuel in than is usually required.

The likely reason for this is that the vehicle’s carburetor is clogged. The carburetor will require cleaning.

6. Problems With The Deck

A common issue with the John Deere la 145 is that the deck is not level. This is usually caused due to the deck being bent. The deck may not engage when the knob is pulled up.

You can try putting a jumper wire over the wire, which goes from the engine to the seat.

7. Problem With The Idler Pulley

The idler pulley would need to be replaced.

8. The Mower Blade Fails To Work

The mower blade can stop rotating while mowing. Even after turning it on and off, it does not seem to work.

Alternatively, the mower blades initially start along with the engine. However, the PTO fails to stop the blades even when the user goes into reverse.

If the deck is working while pressing the forward pedal, then the reverse switch is faulty. If the deck does not engage at all, then a seat switch might be required. Another possible cause could be that the battery is not strong enough to engage the clutch. Consequently, a battery change is required.

When the mower is engaged or it comes across a body of grass, a loud grinding noise comes persistently.

All the drive pulleys in the machine need to be checked. If one of them is not spinning freely, it might have been dislocated. Consequently, the pulley might be grinding metal on metal, and this friction is causing the noise. The other cause could be that the mowing blade has suffered a collision, and it has got bent or warped. This could be causing it to grind against the underside of the deck.

10. The Tractor Loses Power When Climbing

The tractor faces issues when accelerating or losing when climbing up an incline in the lawn. Alternatively, it can refuse to climb while the vehicle is warm.

You can try readjusting the drive belt. It would help if you removed the deck and disconnected all wiring to the clutch. The belt shield on the clutch pulleys will have to be loosened so that the belt itself can be routed over the motor pulley and through the clutch pulleys.

11. The Belt Comes Off In A Mowing Motion

During mowing, the belt gets thrown off. Over time, as the belt wears down, it gets stretched. Another factor that can cause the belt to jump is that the spindles and pulleys are all worn out.

The tension of the belt requires adjusting. There are bolts on the bracket, and the tension is provided by a spring attached to a pulley which can be manually adjusted on the deck. With the belt in place, adjust the position of the pulley forwards or backward as required. In the case of worn-out spindles, new ones need to be purchased.

The steering wheels in the front get tilted out at the bottom.

Transmission might become difficult to shift due to broken shift linkage, worn-out hydrostatic pump, or transmission shift control parts might have become faulty.

Power might be insufficient, and there can also be leakage from the transmission.

What is the break-in period of the tractor as prescribed by the company?

It is recommended that the new engine should be run hard for at least five hours. However, the break-in period can last for as long as the first fifty hours of operation.

What can be used for cleaning the carburetor?

You can use a carburetor cleaner or a brake cleaner.

Does the John Deere la145 come with a warranty?

The tractor comes with a minimum warranty of two years.

What should you do if the mower vibration is excessive?

The blades will need to be balanced, bolts have to be tightened, and the pulley needs to be cleaned.

In this article, we have comprehensively covered all the problems that can tentatively occur with your John Deere la145 tractor. Whether it is problems related to the engine, the various parts, various movement problems, and so on, we have attempted to rigorously provide you with all the solutions for the various problems. We hope this discussion will come in handy for you.