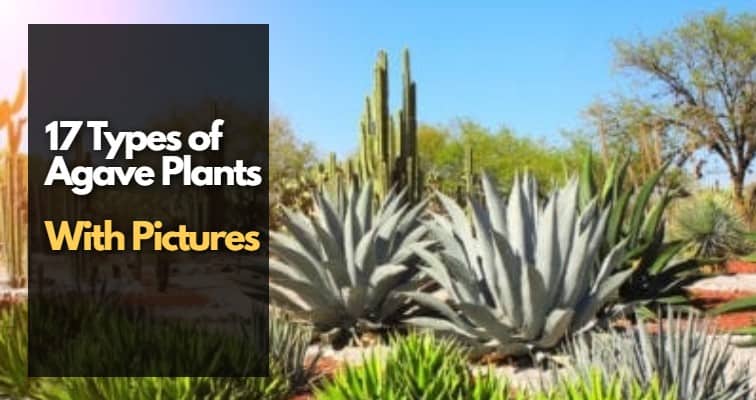 When taking your tequila shots, you may be forgiven if you didn’t know it was made from the agave plant. Blue agave is steamed, mashed, fermented, then distilled to form the tequila we all love. In this article we ll see for the most popular and exciting types of agave plants.

The agave plant is a popular member of the succulent family. It is easily identified by its pointy, toothy leaves, which can have different hues depending on the species. For this reason, agave plants are grown in clusters as a barricade to keep animals like dogs out of your garden.

Agave plants first originated from desert areas worldwide, but it is now grown all over the world. Like most succulents, it is a wild plant that requires little or no maintenance, one of the reasons it is so popular among gardeners. And with over 200 different varieties to choose from, you’ll indeed find the perfect agave species for you.

Agave takes decades to flower, but when they do flower; they produce an enormous spike that can grow up to 20feet in height. Bear in mind that agave begins to die when they start flowering.

Like other succulents, it is easy to grow and maintain Agave Plants. All you need to do is follow some basic steps, we mention below, and your plant will be thriving.

Agave plants love bright light. Hence, it’s critical to expose your plant to direct sunshine for many hours each day. And, if you’re growing them indoors, make sure they’re on a windowsill or a deck.

However, do not expose your plant to direct sunlight, as this can cause it to burn.

Since Agave plants are succulents, they need little water. You should water your plant only when the soil is completely dry. Also, watering is advisable during the dry season.

Adjust your watering level depending on the rainfall and humidity.

To grow these plants, go with well-drained soil. Remember, excessive water-logging can cause root rot. Agave plants also thrive on soil that is mildly acidic to neutral.

These plants do not require fertilization. But, you can provide your plant with diluted fertilizer once a year for its better growth.

A hot and dry climate is good for these plants. If you stay in the USDA hardiness zones 8-10, your Agave plants will flourish. But remember to protect them from frost during the winter months.

Can Agave Plants be Grown in Containers?

Agave plants can grow in pots and on the ground. They thrive in pots. One benefit of growing Agave plants in containers is that they are slow growers and do not require frequent vessel changes. Agaves are succulents with rosette-shaped leaves that grow in a circular pattern. This trait also makes these plants compact and perfect for container gardening.

Here are few types of agave plants with pictures.

Perhaps the most prevalent agave species and for no other reason but its role in the making of the tequila we all love. The blue agave grows up to 7 feet tall and produces a yellow flower when it reaches the flowering stage. Its leaves are blue-green, and the plant grows best in well-drained sandy soil.

This is a small agave species that only reaches a height of about 8 inches, making it an ideal container gardening agave. The small flower agave produces little hairy filaments around its leaves. It also has butterfly-attracting yellow flowers, making it a great addition to any of your butterfly garden.

Just like agave parviflora, this agave variety produces thread-like filaments around its leaves. Its leaves are bright green with white edges, which are enhanced even further by the white threads. It takes about ten years to flower, and it produces green-white flowers. It sometimes births new plants when the parent plant dies after flowering.

The American century agave has blue-green foliage and creamy edges. If you love bird gazing in your garden, you should consider this plant to attract hummingbirds. Its leaves are long and thin with a pointy edge. Agave Americana is large growing and makes a right specimen plant in an open setting.

It is also known as queen victoria agave. It is a small agave variety with black-tipped leaves curving inwards to form a dome. Because of its size, it can comfortably be grown indoors in containers. The plant does not produce flowers for about 2 to 3 decades; when it does, it has reddish-purple or cream-colored flowers standing on a stalk 15 feet high.

It is also known as the dragon tree or foxtail and grows up to 5 feet tall. It got the name foxtail from its flower stalk. The foxtail agave is a soft and non-aggressive agave species you can grow in a small garden where it may be difficult to avoid other aggressive species. It produces greenish-yellow flowers after several years.

This is a unique agave species that produces narrow dark green leaves to make the plant look almost porcupine-like. Its flower stalk grows up to 6 feet tall, carrying small red flowers, making it a great addition to your whimsical garden.

It is also known as pincushion agave and is among the few thread producing species. The twin flowered agave is a rare species found along the Mexican west coast. It is a slow-growing dwarf variety that grows about 2 feet tall and 3 feet wide. Its ‘twin-flowered’ name stems from the fact it grows its green-yellow flowers in pairs beside each other on spikes of about 8 to 12 inches tall.

As the name implies, the mountain agave loves growing on high mountains and in-between rocks, making it the right plant for your rock garden. It can survive for long without water and maintenance. It takes about a decade to flower, but it produces a tall, gigantic flower stalk of about 10 feet tall with several short branches bearing yellow flowers.

Like its name, this is a giant agave variety that grows up to 11 feet tall and spreads to about 12 inches. It produces dark green leaves with sharp edges, so you may want to plant this agave away from where kids usually play to injure themselves. It has yellow flowers sitting on a tall spike.

Agave titanota is another slow-growing solitary agave; it reaches a maximum height of 2 feet and spreads up to 3 feet. Its leaves are pale green, flat with a pointy tip and sharp edges. Even though the edges are sharp, they are not especially harmful to be around. They produce yellow flowers after about a decade. They are sun-loving plants with high heat tolerance and thrive in temperature as low as 20 degrees Fahrenheit.

This is a relatively small agave variety growing just 2 feet tall and 2 feet wide; however, it has a tall spike of about 20 feet, with red flower buds that open to yellow when flowering. Its blue-green leaf color brings contrast to your garden design, and its slow-growing nature means you get to enjoy it for long before it dies. This is an exciting species that produces suckers of new plants before it dies.

It is also called spider agave because of its leaves that look like a spider. It is a drought-resistant plant that will fit nicely in a desert landscape. Its size also means it can be grown in containers; it grows about 2 feet tall and 2 feet wide with a 5-foot spike when flowering. Its leaves are green and soft so that they can be increased along pathways without the fear of injury. The spider agave is among the few agave species that produce suckers of new plants before they die off.

It is also known as agave univittata and is common in Mexico and some parts of the United States. It is typically green in color, but some variegated species have yellow stripes and a green midline. Thorncrest century agave grows 3 feet tall and 2 feet wide with flat leaves growing in an outward spiral. It is slow-growing, but it produces greenish-yellow flowers when it does bloom.

Commonly called butterfly agave because its leaves look like a butterfly. It is a slow-growing, medium-sized agave that can be controlled by growing it in a container. It comes in several colors; some can be blue-grey, green variegated with yellow or pale green. Whichever color variety you get, your garden is sure to receive a facelift.

This is a large agave variety that can grow up to 4 feet high and 6 feet wide with its spike reaching 20 feet tall. It got its name from its swirly leaves that look like an octopus’s legs if it isn’t apparent already. Its leaves tips curl inwards to form this attractive shape. It forms yellow flowers after a decade of growth. It can grow under full or partial shade but does not have a frost tolerance.

This is a people-friendly agave with soft, smooth leaves. It can grow up to 3 feet tall and 4 feet wide when planted in the ground as containers limit its size. It has a rosette leaves pattern with a deep green color. When it flowers, it produces pale yellow flowers sitting on a 10-foot spike.

Like most succulents, the agave plant requires very little maintenance, so it is a great plant to have in your garden if you plan to be away for a long time.

They last for decades before they flower and die. Some varieties even produce new plant suckers before they die. So what is your excuse for not growing this succulent?