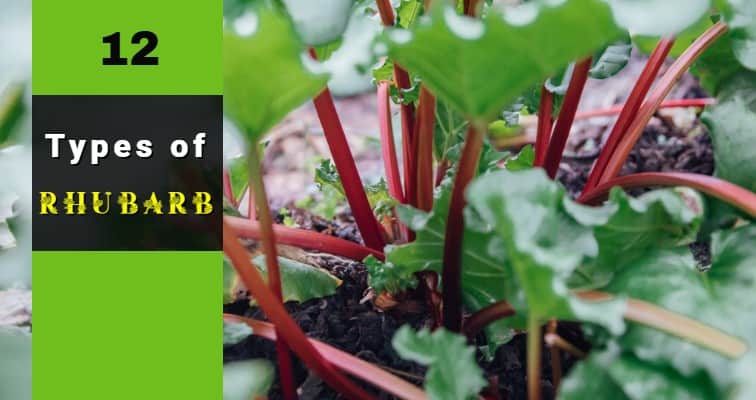 Everyday meals and recipes have taken a new turn (a right turn, trust me!) since people embraced Rhubarb. This vegetable is highly nutritious and with its slightly varying flavors across its different types, making it even more attractive. In this feed we will get to know Twelve different types of Rhubarb plants and learn about them.

You may be forgiven to think rhubarb stalks can only be red or the red stalks are the most delicious. That cannot be farther away from the truth. They come in several varieties and colors. 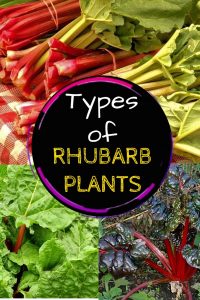 The color of a rhubarb plant has nothing to do with its flavor. Even green Rhubarb can give you excellent taste.

Rhubarb is a cold-hardy plant and thrives in colder climates, but that does not mean all hope of growing this plant in a warmer region is lost. That is why I’m giving you this article. You’ll find different rhubarb types, including those that have adapted to more hospitable areas. For a more in-depth guide to growing Rhubarb, see this article.

Rhubarb can last for more than a decade, even more than two decades, if grown organically in the right condition. If garden space is a problem, Rhubarb can be grown in tall raised beds. You can decide to use large containers for container gardening. 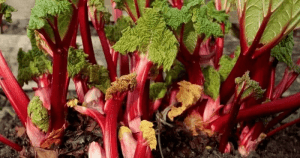 There are hundreds of different rhubarb cultivars, and identifying them is a challenge. This is because very few rhubarb growers can trace the genetic origin of the rhubarb type they’re growing, so they name their plants based on characteristics.

Another factor that makes identifying these cultivars difficult is that the plant changes some of its characteristics as it grows, thereby making it different for new owners to place it with its parent plant. New hybrids may have little or no resemblance to its parent plant.

The nutritional value in Rhubarb is relatively constant across all types of Rhubarb. Color, flavor, and texture are some of the qualities that vary across types.

To somewhat negate this considerable challenge, one should identify Rhubarb through its characteristics and not just its name. In this article, you’ll see some of the characters you can use to determine each variety.

As earlier stated, the hundreds of different types of Rhubarb and including its sometimes changing characteristics make identifying the kinds of Rhubarb difficult. I’ll be doing my best to simplify this challenge. 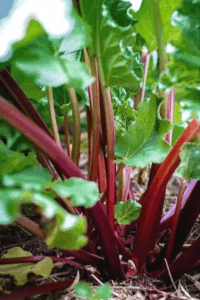 The stalks here are pure red as blood. It produces juicy red stalks that are irresistible. Holstein bloodred can grow as high as 4 feet and spread as wide as 5 feet, making an enormous amount of Rhubarb.

It is believed, even though wrongly, that red stalk is the juiciest of them all. So this type will give you an edge if you’re planning to sell them. They love to grow under the sun and is an heirloom plant; you’ll enjoy it for years. 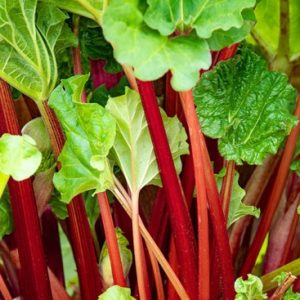 Kangarhu rhubarb is another red rhubarb variety. It has the deepest red stalk of any rhubarb variety, which makes it market-friendly. It is also heat resistant and is comfortable in warm climes.

This native Australian Rhubarb leaves an exquisite taste when cooked. Another thing that makes this type of Rhubarb a fan favorite is its long harvesting season, which can last from spring to late summer. When a lot of other plants have dried out or bolted, this one is just getting started. 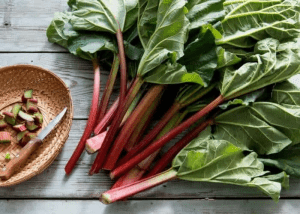 This is an English rhubarb variety with distinct stalks. Its stalks are red at the bottom, which then steadily turns to green at the top. It is a good rhubarb for storing in cans and freezing. You can also use them in pies and jams.

Glaskins perpetual loves to grow in colder climates and typically matures faster than most other varieties. The seeds can be grown indoors first till it is strong enough to be transplanted. 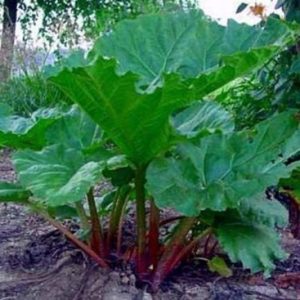 Chipman’s Canada red is a native Canadian Rhubarb that produces sweet tender stalks. It keeps its cherry-red color even after being cooked.

Its stalks are big and succulent and can grow up to 3 feet tall while spreading to 4 feet wide. It is a cold-hardy plant that grows well in Canada or areas with similar climates. 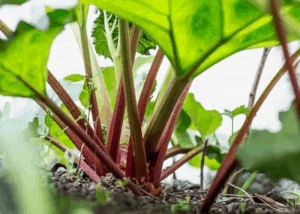 It is a delightful variety for gardeners scared of the occasional tarty rhubarb nature. 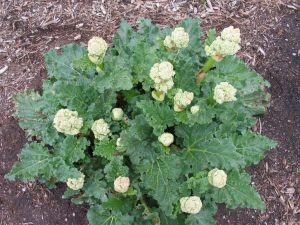 This is a flowering rhubarb variety grown for its ornamental value rather than a source of food. Ornamental Rhubarb is a medium-sized plant with attractive green leaves and even more beautiful flowers.

This Rhubarb produces small edible stalks but is better suited when used to beautify your front yard landscape. They have distinctly shaped leaves with crinkled edges. 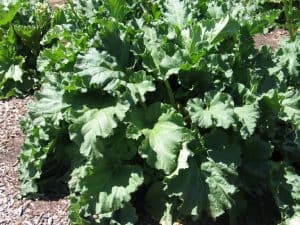 Even though red Rhubarb is more common, green Rhubarb can equally produce strong-flavored stalks. Turkish Rhubarb originated from turkey and is a green rhubarb variety with a green inside and outside stalk. The stalk, however, has a red base.

It takes a little longer than most varieties to mature, which means harvest typically lasts longer than the average rhubarb type. The stalks can grow as long as 18 inches, but it is typically is shorter than that. If this plant isn’t harvested on time, holes form in the stalk. 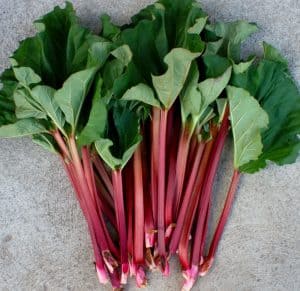 This is not so common as the others mentioned in this list, but it is worth mentioning. It produces slender red stalks that are red through and through.

It can give you the necessary red color in your meals, no matter how small you put. This variety is slightly tarty. 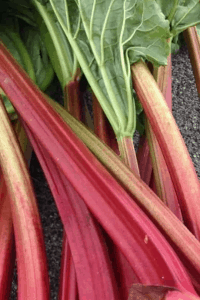 Victoria is quite popular among gardeners. Its medium-sized stalks are deep red at the base while steadily becoming lighter as it reaches the top. It is one of the earliest known varieties, with its earliest record found in 1837.

It has a slightly tarty flavor and can be used in desserts, sauces, and jams. One thing to note; it is a late-maturing variety. 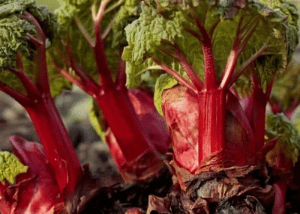 Not only does this Rhubarb love cold temperatures, but it also loves damp areas, good news for people living in wet areas like the Pacific Northwest. It is also called crimson cherry or crimson wine and is the only relevant rhubarb type in Oregon.

This type of Rhubarb produces long red stalks that are equally good in pies as well as freezing. It takes about a year before you can harvest, and like most varieties, it can grow up to 3 feet tall and spread to 4 feet wide. 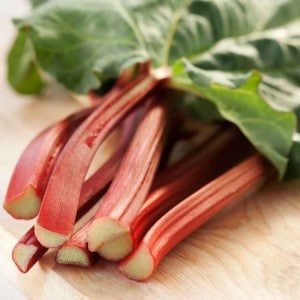 If you’re looking for an all-rounder, you can’t go wrong with Timperley early, and as the name suggests, it matures early. Its stalks can grow as long as 24 inches, and it is somewhat disease resistant.

Because of its early maturity, you can afford to harvest a few stalks in the first year. 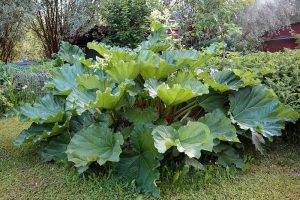 As the name implies, this is a giant rhubarb variety. When it comes to cold tolerance, this is one of the foremost rhubarb plants. It can survive temperatures as low as -40 degrees Fahrenheit.

This is a giant variety as it can grow up to 5 feet tall while spreading up to 4 feet wide. A significant downside to its size is its slow-growing nature. It may take up to 3 years before you can get your first harvest. Can you wait that long?

No matter the type of Rhubarb you want, whether tarty, sweet or somewhat bland, there’s always a variety for you.

Rhubarb is cold-hardy, but as you have seen, some types will grow as well in warmer climates, so don’t let the environment stop you from growing a few rhubarb varieties in your backyard.