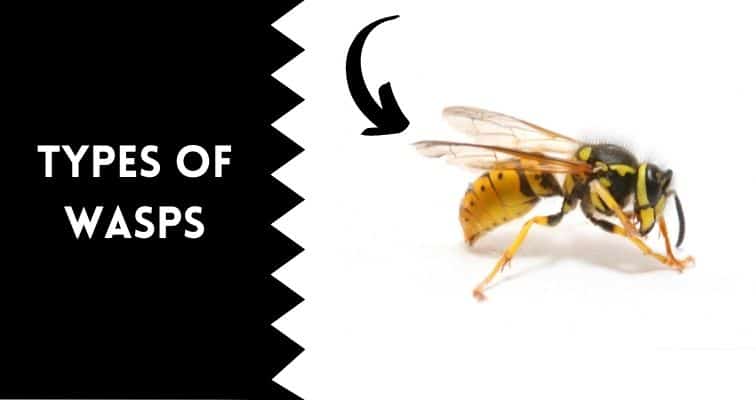 Wasps are powerful stingers and inhabit this planet with more than ten thousand species. This makes it interesting to find out some traits to identify the different kinds. Wasps belong to the Hymenoptera order, and these are broadly divided into solitary and social ones.

Let us now find out about the various types of wasps.

Yellow Jackets are commonly found in nature. These have aggressive behavior. There are various yellow jacket wasps, and most of them have a characteristic black and gold pattern. Some variants have white color instead of yellow. Some of them may also have red markings all over their body. Most Yellow Jacket wasps grow to a length of 3/8-5/8 inches. These are almost the same size as bees, but they are less hairy than bees—Yellow Jackets nest in paper cartons. The nest could be close to the ground like timber and plant roots, or they could be aerial and attached to the garages or bushes. Yellow Jackets do not usually sting unless someone threatens their nest. They are considered beneficial because they play a crucial role in controlling many species of pest insects. You may want to get rid of it if their nest is located close to a human-built structure.

The Paper wasps get their name from the material that they use to make their nest which is paper. The wasp mixes the wood pulp with their saliva and regurgitates it. These nests are commonly found hanging from trees. The Paper wasps are brownish and come with red or yellow markings. They can be recognized with their long legs. The Paper wasp is brown and has reddish and yellow markings on it. These construct their nest in the shape of an umbrella that is not enclosed. You can find the nests hanging from the branches and twigs. If you touch their nests, you may get stung. Else they are not the aggressive types.

Mud Daubers have slender bodies and belong to the solitary wasp category. They have yellowish markings on their bodies and are characterized by their yellow wings.

They are slender, long, and are usually black. You may also notice a metallic luster and pale marking on their body. The Mud Daubers get this name because they dwell inside mud which is where they construct their nests. The wasp digs a tunnel of 1-inch side by side and then deposits one egg in each of these tunnels. You can spot their nests in garages, sheds, and under the eaves. The mud daubers do not stay in colonies. Instead, the females construct the nest. Mud Daubers help in controlling spiders and thus are beneficial in controlling insects. You will have to control the wasp only if you notice them building nests in a location where there is human activity.

The gem-like beautiful coloring of this wasp because of which it gets its name, the Jewel wasp. The wasp is fascinating and mysterious because of its specialized skills. The wasp attacks cockroaches and are predators by nature. The peculiarity of this wasp is that instead of killing and feeding on the cockroach to get their nutrients, the wasp inserts its sting inside the cockroaches’ brain and injects a venom cocktail that does not let the prey make any decision. In turn, the prey just becomes a pawn of its predator.

The cuckoo wasp is a mix of bright green and red, and you can notice some intricate sculpting on its exoskeleton. Owing to its color, it is also referred to as the Red-tailed wasp. The wasp is tiny in size, and when it is threatened, it immediately curls up in the shape of a ball. The wasp gets its name because, like cuckoos, it does not construct a nest. Instead, these only lay their eggs in the nests that the solitary wasps have built. They also steal their food to feed their larvae.

The European hornet lives in papery structured nests, and you can find them under hollow trees. There could be more than 400 adult wasps that live together in a colony. The wasps have blackheads, and some may also have red markings on them. They are large and threatening. Their abdomen has a typical yellow and black pattern. These wasps do look big and scary, but they don’t sting you unless you attack them. The wasp grows to a size of ¾ to more than an inch. Most of them have very pale faces. The wasp species help control pests.

The bald-faced hornet has a black and white-colored stout body with a black upper body part and head. These are highly aggressive, and if they feel that their nest is in any danger, they sting continuously. You can find their nests attached to the low branches of bushes and trees, and they may also hang from a building eave. Their nests are large and can grow to even 24 inches in length. The wasp species control many pests, so they are beneficial to nature.

No, these wasps are not blue. These have a shade of blue-black wing, and in most cases, you may not even notice the blue shade. However, they are easily distinguished by the bright yellow spots found near their waist and orange abdomen. This wasp species is also good at controlling pests.

The wasps, as the name says, have a very thin waist. They have a blackish color with an orange abdomen and bulging eyes. The wasps have long and skinny legs, which they use to grab on a plant. The Thread-Waisted wasp lives on mud nests, and they ambush their prey to attack them. First, they attack the small insects and paralyze them with their venom. They then lay their eggs inside the body of the victim.

The Cow Killer wasp is also known as the Velvet ant. The wasp is a solitary parasite that lays its eggs in the bumble colony. The females do not have wings, and they sting so badly that they can even kill a cow with it.

The wasp preys on the cicadas, and they are usually not a threat to humans. The Cicada Killer wasp can be identified by their black bodies that have yellow markings on them. You may notice a few of them working in harmony, building a nest. The nest looks like a burrow of a small animal. The wasp hunts for cicadas and can attack them in the middle of the air. They paralyze the cicada with their sting and then take the bodies back to their nest so that their larva can feed on them. The adult Cicada Killer could be spotted in your garden because they feed on the flower nectar.

The wasp is small in size, and one may confuse it with a fly. They have red bodies, blackheads, legs, wings, and antennae. You will notice a long needle that resembles a stinger, but this is not the case. Instead, they use this needle to deposit eggs inside the holes of the trees that keep the egg protected from predators.

Potters wasps are solitary by nature, and they survive by killing caterpillars. You may thus want some of them in your garden. These are usually black and have a yellow band over their thorax. You will also spot a yellow band on their abdomen. The wasp does not build nests and prefers to lay eggs in the abandoned nests. They search for caterpillars, and when they find them, they hunt them down, paralyze them, and then take the caterpillar to the nest, where they lay their eggs.

The Four-Toothed Masons can be distinguished with their protruding mouths, which look like teeth. The wasp is tiny and has a hairless body. The white markings are what make it easy to recognize the species. These wasps hunt on moths and caterpillars and feed their larva with it.

The Great Black wasp belongs to the large digger family, and these usually live in caves. These are large and can be easily recognized with their bluish shade and shiny black bodies. The wasps do not attack humans, so they are not dangerous. However, they are helpful for the environment because the Great Black wasp helps in pollination. They also remove pests.

Wasps are not something that you may want to mess with. Wasps do sting, but they are not more dangerous than bees. They do not attack humans if humans leave them free. Wasps are very particular about their nests and defend them viciously. However, these pests serve some purpose in the environment, so you may want to appreciate them a bit.