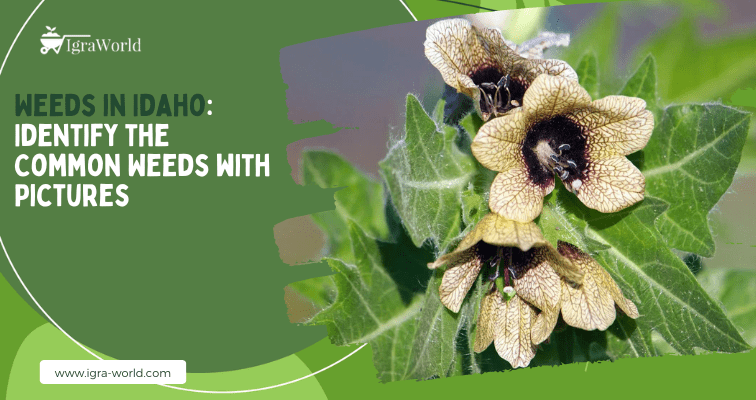 The state of Idaho has identified nearly 67 different weed species, out of which 51 varieties are terrestrial. However, noxious weeds are categorized into four types: Early Detection Rapid Response, Statewide Prohibited Genera, Containment, and Control.

Weeds are one of the biggest invaders of the ecosystem. They are a nuisance, a headache.

Weeds can take over various habitats, grow aggressively and choke out native species. And Idaho designates a weed as toxic when it threatens agriculture, lawns, public health, wildlife, or recreation.

And dispersal of plant parts or seeds helps in spreading these invaders. So people strive to do everything they can to keep weeds away from their property.

However, before executing a specific prevention approach, it’s important to identify the weed species correctly. And this article will help you with it.

So keep on scrolling!

While weeds rob soil nutrients and moisture from their surrounding desirable crops, their eradication is necessary. This is because they can substantially reduce harvest efficiencies and expected yield.

So let’s look at the common weeds intruding the lush, green gardens or lawns in Idaho.

While this weed is a member of the legume family, they bear nitrogen-fixing abilities. Thus, they can survive in unfertilized landscapes. If you see white clover sprouting on your property, it may signify inadequate fertility.

However, white clover is known for its creeping habits that allow them to compete against broadleaf weeds. But they cannot thrive well in dry soils due to their shallow root system. Therefore, the appropriate temperature for white clovers is 50 to 85-degree F.

Cultural management of white clovers is typically hard as they co-exist with turfgrass. Plus, their creeping stolons help in rapid spreading.

How To Spot White Clover?

The first characterizing features of this herbaceous weed are its creeping stems and 10-30 cm tall flower stalks. The stems germinate closer to the soil surface, less than 30cm long, and roots emerge at the nodes or joints. And they are hairless.

Each leaflet is egg-shaped, oval, or heart-shaped with toothed margins. However, the upper surface shows unique V-shaped, pale green markings and notched or rounded tips.

Flowers look small pea-shaped, and are pale pink to white. They appear in dense rounded clusters at the top of the erect stalks. Each has a large upper petal, two lower petals, and two side petals, fused and folded. Moreover, each flower consists of five reddish or green sepals joined together into a small tube.

You will find tiny stamens and a stigma and style holding up an ovary. Flowering usually occurs in spring and early summer. The old flower parts consist of tiny pods, and each fruit further bears three to four seeds.

Apart from the seeds, white clovers even reproduce through their creeping stems. However, weekly irrigation, proper mowing height, and fertilization are some of the most effective measures to control this weed.

Next on our list is a summer annual broadleaf weed seen throughout Idaho – black medic. This plant can establish in disturbed or drought-prone soils.

Moreover, being a legume, a black medic can fix nitrogen. So they can effortlessly compete for turf even in nutrient-deficiency soils.

Black medic can tolerate low mowing height as well. Interestingly, many consider this weed an annual clover, but it is not.

How To Spot Black Medic?

Black medic features somewhat square stems that grow low to the ground and expand below the turf canopy up to 2 feet long.

They start to germinate seeds during the early spring or autumn. However, their low-growing stems don’t produce roots once established. But black medic has a central, deep taproot.

Next, you will notice trifoliate leaves that are pale green beneath, dull green on the top, and toothed close to the tip. However, the teardrop-shaped are also often seen on clovers. But you can easily distinguish black medic from clovers by the flowers.

Black medic has small yellow flowers appearing in clusters during the spring. Upon maturation, the flowers create a tightly-coiled black seedpod that contributes to its name, ‘black medic.’

On the other hand, this weed is also often confused with white clover and oxalis due to the three-leaf arrangements. But black medic has a slightly longer leaf stem in the center leaf than the two lateral leaves.

You can control black medic infestations by mowing daily, refining turf density via fertilization, and propagating turf grasses adapted to your site condition.

Have you noticed patches of light blue to purple flowers blooming in landscapes in dry summer?

It’s possibly chicory. It is among the few perennial weeds that flower from June till fall. With its long taproot, this plant can reach moisture in the soil in extremely dry conditions when shallow-rooted crops are dying of thirst.

Chicory can reproduce only by seeds. However, you can identify chicory by its rough-hairy and coarse leaves that superficially resemble dandelion leaves.

How To Spot Chicory?

This perennial weed usually blooms from July to October and can reach up to 5 feet in height. They emerge initially as a rosette and feature toothed-shaped basal leaves on the rosette area. A sturdy and leafless stem develops later from the rosette.

The stems are hairless except at the bottom part. However, you will see small leaves scattered barely along the stalks. Young leaves are egg-shaped or oval and manifest a paler green shade. On the other hand, each chicory plant comes with numerous slender branches.

The deep taproot system has a milky sap, referred to as its juice, known to taste bitter. Each plant is characterized by as many as 20 petals and can produce nearly 3,000 seeds.

Flower heads are attractive and bright blue. They are stalkless or appear on short stalks in clusters on the branches.

Chicory can thrive in moderately drained to well-drained soils with high to medium fertility levels. Although it is resistant to mowing, chicory can’t combat deep tillage.

You May Also Read: Weeds in Nebraska: A Complete Identification Guide

This aggressive weed crops up several horticultural landscapes, lawns, agricultural and ornamental fields, and turf. Field bindweed can be challenging to manage if they establish because of their characteristic deeper taproots with extensive rhizomes.

On top of that, this weed contains alkaloids that are moderately toxic to livestock and cause digestion issues. Bindweeds are basically of two types – hedge bindweed and field bindweed.

Fascinatingly, hedge bindweed is known to be lesser of a nuisance in propagated fields than field bindweed. However, they also commonly pop up in nurseries, row crops, and landscapes.

Field bindweed is commonly seen in annual vegetables and row crops because of their taproot system that can thrive in cultivation.

How To Spot Field Bindweed?

Both seeds and rhizomes help in reproducing field bindweed. Seeds sprout during the spring and early spring but can stay viable in the soil for more than 50 years. Rhizomes start producing shoots in early spring, and farm equipment or cultivation usually helps spread them.

Field bindweed has large, dark green, smooth and kidney-shaped cotyledons with long petioles. In addition, they exhibit smooth edges and whitish veins. Many new plants can germinate from rhizomes but won’t have cotyledons.

Young field bindweed has bell-shaped leaves with petioles and is lobed at the base, measuring 1.5 to 3.5 cm long. The plant develops hairy to smooth stems 2 to 7 feet long when it matures. However, these stems wrap up vegetation or trail along the soil surface.

Mature leaves are typically 4 to 6 cm long and shaped like an arrowhead. On top of that, mature plants have extensive rhizomes extending up to 30 feet beneath the soil. Keep note that even the smallest root fragments can re-germinate readily.

Flowering starts from June until September. One to two flowers appear at the leaf axil (where leaves join the stem). However, the leaves are shorter than the flower stalks.

Next, you will see two leafy bracts at the flower base. The petals are usually white, but you may even often find pink petals. Nevertheless, the petals are fused and form a funnel-shaped tube at the base, producing a trumpet-like flower.

Field bindweed produces oval to rounded fruits; each fruit contains four seeds with one flattened side and one rounded side. The seed color ranges from dull gray to black or brown.

The extensive root system of this weed creates more shoots if disturbed. Plus, their seeds can remain active in the soil for decades. So, managing bindweed often becomes very difficult. However, frequent cultivation can diminish the root and seed reserves.

Another effective measure might be to till at their blooming stage, as root nitrogen and carbohydrate storage are lowest.

Buffalo bur is usually known as a nuisance in their native space due to its aggressive nature. This weedy plant can expand rapidly via seeds and tolerate various soil conditions, including drought. A single plant can give rise to a large population in any new preferable landscape.

Its ball-shaped variety breaks in autumn on the soil, scattering the seeds through the wind. Moreover, hard seeds that remain in the soil for many years can even give rise to seedlings. So while it’s an annual weed, the best defense is to prevent flowering and seed production.

Once the soil seed reserve exhausts, this plant will eventually get eradicated.

How To Spot Buffalo Bur?

Buffalo bur is an annual spiny plant with hairs growing ½ to 3 feet in height. You will see yellow, straight spines, about 1/8 to ½-inch long, covering the entire plant, apart from the petals. Leaves appear in alternate arrangements and measure 2 to 6-inch long.

They are bushy, upright, and very prickly, ranging from ½ to 3 feet in length. Moreover, leaves have 5 to 7 irregularly cut lobes and so very prickly. Buffalo bur has to branch upper stems.

Flowers appear in a cluster of 3 to 15 from May to October. They are five-lobed, circular, flat, and yellow, about 1-inch in diameter. Apart from this, the plant produces dry berries with sharp spines that entail flat, wrinkled, and black seeds.

You can control this seed production with repeated hoeing, close mowing, or hand pulling before the plant starts blooming.

Black henbane can be annual or biennial and grow up to 3 feet tall. This weed is known to possess alkaloids like hyoscyamine, which is responsible for livestock poisoning. In addition, it’s harmful to humans. Black henbane loves well-drained or sandy soils.

How To Spot Black Henbane?

Black henbane has hairy and thick stems and large leaves of 8 or more inches. Moreover, the grayish-green leaves have a white vein down the middle and are roughly toothed.

Another characterizing trait is their large taproot. Interestingly, they show a displeasing order at every growth stage, especially after being crushed. And a dried black henbane skeleton can remain erect for many years.

The best way to control the weed is by mowing, tilling, and burning. You can even control small infestations by digging or pulling out the plant. On the other hand, you can carefully put the mature fruits in bags and throw them away to prevent seed dispersal.

So these are some of the most common weeds competing with the native plants and cultivated crops in Idaho lawns, gardens, and agricultural landscapes.

Hope this article will help you correctly identify the common weed species for effective control and eradication.