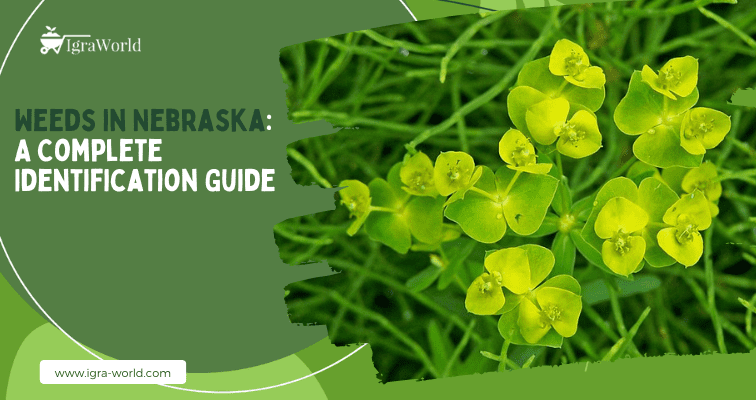 Nebraska’s large farmlands and open pastures abode some of the most noxious and tough weeds.

These invaders look for opportunities to spread their roots and occupy big plots of land.

Eventually, it hinders the expected yield significantly. And the Director of the Nebraska Department of Agriculture declares such plants ‘noxious.’

The loss can be bewildering, costing nearly millions of dollars. This affects the landowner and corrodes the residential tax base of the state. So weed control should always be a significant activity.

This article compiles some of the most common lawn weeds in Nebraska, intended to aid you in identifying and preventing them within time.

Whenever you see mysterious and disruptive patterns in your garden, the natural inclination will be to fix them immediately.

After all, your lawn should be WEED-FREE! And for that, you may have to go to greater lengths to eradicate them. But the first task would be to identify the weed type properly, and this article will help you with it.

Russian olive is a highly competitive medium-sized deciduous tree that can choke out native vegetation.

However, it is known to be a good source of alkaloids, flavonoids, vitamins, and minerals. In fact, its fruit is food for birds like robins, cedar waxwings, quail, and pheasants.

Russian olive seeds can spread over larger areas and to other areas by animals and birds eating the fruit. However, in the case of shallowly rooted Russian olives, damage to the main trunk can cause extensive germination from the root crown and the total root system.

This plant can tolerate drought and periodic flooding. Moreover, they can survive in soil types (loamy, silty, sandy) and moisture content, including high salinity and low fertility.

However, new plants can sprout from vegetative structures, while the maximum number of new plants emerge from seeds. Animals and birds help in transporting the seeds to other places.

This deciduous, fast-growing shrub can grow 10 to 25 feet tall. Leaves are alternately arranged, lanceolate-shaped, and have smooth margins.

Moreover, the leaves have a green-gray upper surface and silvery-gray leaf stalks and lower surface. And while sprouting close together, they create a dense clump.

The foliage appears silvery, with tiny scales covering the leaves. However, you will notice dark reddish-brown branches with woody thorns measuring 1 to 2 inches. Even the twigs have scales that produce a silvery-gray effect.

Yellow, bell-shaped flowers bloom from May to June, occurring in clusters. On the other hand, fruits are shaped like small olives, bearing a single seed. However, fruits appear silver when they first appear but turn brown or tan once they mature.

Another key characteristic of this plant is its well-developed and deep roots. The crown or lateral roots beneath cause regrowth.

Many people often confuse Russian olive with some varieties of willow. But you can easily distinguish this weedy plant by its seeds and flowers.

Furthermore, willow seeds are fastened to a cottony, white pappus. In contrast, the fruits of the Russian olive encase the seeds.

New plants germinate from any plant parts and lateral roots if disturbed. So, the most efficient strategy is to prevent the formation of the first plant.

This biennial weed germinates in the spring, creating a circular rosette arrangement. They stay as a rosette during the first year, and stem flowers appear in the second year, after which they die.

Musk thistle has spiny leaves and erect stems, reaching up to 6 ½ feet in height. Leaves form as a basal rosette in the first year – the first two true leaves are opposite, and others alternate.

These rosettes elongate and produce flowering stems in the second year.

Musk thistle has dark green leaves with white to light green veins and midribs. In addition, they are deeply lobed, nearly 4-inch wide by 10-inch long.

Each lobe exhibits three to five yellow or white spines along the margins. However, leaves on flowering stems display alternate arrangements.

Stems are branched, erect, and covered with spines expanding down the leaf bases.

Each branch ends bears solitary flower heads, and each flower measures one ¼ to 2 inches wide. And color ranges from violet to pink and purple. Moreover, you will see purple spiny bracts beneath the flower heads.

A key feature is a large, thick taproot. During the first growth year, musk thistle can look like bull thistle. But you can differentiate between the two by the leaves. For example, bull thistle’s leaves are covered with hairs.

Controlling this prickly weed is imperative because they diminish the quality of a lawn or garden. The ideal stage to control this weed is preventing rosette growth.

This means you should apply herbicides when the plant is yet in its rosette stage. However, always wear gloves while handling this weed.

And remember to read and follow the instructions labeled on the weed killer or herbicides you are using and spray on time.

Also Read: How to Get Rid of Canada Thistle | Complete Guide

Here is another aggressive and invasive weed that can out-compete almost all other crops and dominate a land.

Common reed comes with thick roots with rhizomes that expand beneath the ground creating dense mats. This discourages the surrounding plants from getting established.

The rapid growth of this invasive species threatens wildlife. In addition, it enhances the probability of fire, upsetting the natural ecological balance.

Moreover, the flower starts appearing in July and continues till October, arranged in dusky spikelets with silky hair.

These silky hairs appear purplish at the initial growth stage. When they mature, the hairs turn dusky to brown.

Common reeds produce brown, thin, and delicate seeds with long bristles. And besides vegetative propagation, this plant can even reproduce with seeds.

So quick identifying features include –

Physical control of this weed is typically hard as it can regrow from the remaining rhizomes or seeds. However, you can dig up the rhizomes to control their growth.

An effective measure is frequently mowing. In case of a large infestation, herbicide application might be necessary. And an active ingredient in treating it is glyphosate.

Leafy spurge can crop up in dry to moist soils but occur aggressively under dry conditions. The shoots emerge in early spring beneath the ground from crown tissue or sporadic buds on the roots.

Flowers sprout mainly in April and May but can even bloom in the fall. The ideal time for herbicide application is before the flowers appear.

Leafy spurge can turn out the seeds up to 15 feet and remain active for nearly eight years in the soil.

However, seeds start germinating in May, and seedlings develop buds on roots and reproduce vegetatively within 12 days after appearance. And seeds are dispersed by birds, animals, water, and humans.

This erect weedy plant can extend up to 3 feet in height. Leafy spurge displays umbel flowers with yellow-green, heart-shaped bracts growing in clusters.

Moreover, they produce round to oblong seeds, nearly 1/12 inches long, mottled brown or gray. There is even a dark line on one side.

Furthermore, you will see bluish-green leaves with smooth margins, about 1 to 4inches long and ¼ to ½ of a wide. This weed is further supported by a deep root system that can penetrate more than 15 feet below the soil. However, roots reserve important nutrients that keep the plant stress-free.

On the other hand, vegetative buds on the root develop into new shoots, helping them to spread. Leafy spurge also has a milky latex in every plant part that helps them to distinguish them from some other weeds.

This weed can go beyond control once fully established. Moreover, they are known to recover from virtually all control measures.

Thus, experts recommend opting for a combination of control methods for over five to six years. Another key to controlling this weed is depleting the root nutrients to collapse them.

An essential aspect of weed control is vigorous grass growth. So avoid over-grazing your lands.

This woody shrub looks captivating for its beautiful, scented flowers bloom in the spring. Moreover, it is characterized by toothless oval to egg-shaped leaves and opposite branching.

Japanese honeysuckle, a close cousin of honeysuckles, is considered a noxious weed that can choke out a garden and harm the environment.

Long-tongued bees or moths usually cause pollination. The plant develops clusters of bright red berries that birds like warblers and thrushes eat.

For example, in most native species, you will see that the stems are fused to form one leaf.

As a result, they exhibit a medium green hue on the upper surface and a bluish-green tint on the lower side. On the contrary, Japanese honeysuckle has separate dark-green leaves that grow opposite from one another.

Apart from these, the Japanese variety features hollow stems, while the native honeysuckles’ stems are solid. You can even differentiate between the two varieties by their berries.

Most honeysuckle varieties have reddish-orange berries. But Japanese honeysuckles have purplish-black berries. Flowers are white and sweetly scented that emerge in September and continue till May.

In the winter, you can rip off the vines at a convenient height and apply herbicides containing glyphosate on the regrowth during the spring.

This is one of the most prevalent weeds across Nebraska and the United States. Crabgrass spreads via seeds, and fascinatingly, each plant can produce nearly 150,000 seeds that sprout in the following season.

The weed starts germination in the soil temperature of 55 to 60 degrees F.

However, seeds will germinate the best from spring to summer. Crabgrass enters the maturation stage in late summer and dyes during the first frost in autumn after producing seeds.

While thousands of seeds stay active for many years in the soil, this annual weed becomes a perennial problem.

This annual, perennial weed belongs to the grass (Poaceae) family. They have flat leaves, about 0.75 to 6 inches long and 0.5 inches wide.

Moreover, the leaves manifest a clear pubescent and mid-rib on both sides. Crabgrass has truncated membranous ligules, appearing as jagged.

You will see long, straight hairs covering the area joining the stem and leaf, known as the sheath. Next, the stem is rolled and stout, exhibiting a reclining growth pattern. And the node portion can produce additional roots.

Well, crabgrass is usually of two types – large and smooth. Large crabgrasses have densely-haired leaf sheaths and leaves. On the contrary, smooth crabgrasses are purplish at the base and hairless.

While this weed is adaptive to mowing height, controlling them becomes difficult. They can produce seeds at ½ inches mowing height.

You can’t control crabgrass in one growing season as numerous seeds accumulate in the soil several years after infestation. To get rid of crabgrass it is necessary to control seed production for repeated years to diminish active seed production.

The large farmlands and open pastures provide excellent opportunities for invasive weeds to crop up and spread their roots all over the area.

Thus, to protect your lawns from the destructive weeds of Nebraska, it’s foremost important to acknowledge and pinpoint them. This article will help you in the process while correctly dealing with them.