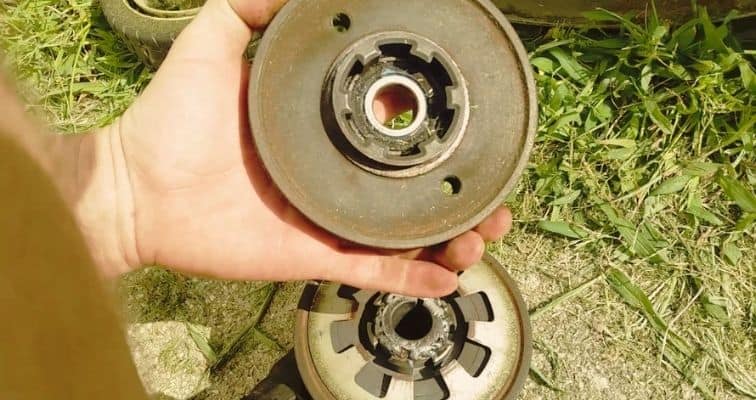 The blade brake clutch is a safety feature on your lawnmower. While it is a great idea to purchase one, it is first important to understand how it works.

What is the purpose of a blade brake clutch?

How to operate the blade brake clutch?

The process of operating the blade brake clutch is similar in most mower models. Here are the steps to follow:

While it is smart to buy a lawn mower with a blade brake clutch for added safety, you should be well aware of how this additional feature works.

If the blade break clutch starts to make a noise, this signal of a mechanical malfunction. Immediately stop using the blade brake clutch.

Before you resume your routine mowing, delve deep and find out the reason for the noise. An improper operation may also create noise. It is important to educate yourself about it and take the necessary steps.

What are the different kinds of noises that a blade brake clutch makes?

You may hear various kinds of noises that may arise because of a mowers blade brake clutch problem. Anything different from the usual noise should be taken seriously.

Here we list down a few common noises that a blade brake clutch could explain the possible reason for the same.

Repairing and Assembly of the Blade Brake Clutch

There are varied designs of the blade brake clutch manufactured by different manufacturers. In most cases, it consists of a couple of drums or plates that get together when the clutch is engaged. A linkage brings the clutch sides together, and a brake is used to stop the blade. This is also where the problem usually starts.

Most issues are found in the blade clutch linkage that is used to engage the clutch. The cables and springs could break, or the bracket could bend. The clutch drum and plates could wear after sometime when it starts to slip not locking well together. The blade brake wears, causing a slight drift in the blade even though the clutch is not engaged.

There are varied designs, so the repair steps differ widely. Here are some standard steps that should be followed:

It is an overwhelming task to repair a blade brake clutch which is best left to an expert unless you are a mechanically inclined operator.

If there is trouble with the engagement of the lawnmower’s blade, then this could be because of a faulty cable.

The cable is attached between the blade clutch and the blade bail. It is made of a metal cable with a plastic sheath, cast metal ends, and one or two mounting brackets. The majority of the problem with the engagement cable arises because of the metal cable itself.

The cast end which connects the cable to the clutch and the bail is prone to severe breakage after many years of use. The steel cable could break or fray, which is accelerated because of rust.

To replace a blade engagement cable

The clutch does wear off with time and would eventually need adjustment or replacing to get it back to its proper working condition. An expert will diagnose the clutch for which he will need to disassemble the mower. The condition will be closely inspected to see if it can be repaired or needs to be replaced.

If several components are broken that restrict the clutch from rotating, there is no option but to replace it. In such a case, refer to the owner’s manual to cross-check the replacement part number should you need a new clutch.

There is some blade brake clutch which is a single pre-assembled unit. It saves the mechanic from removing and replacing various parts. Replacement is the only option if there are issues with this model of blade brake clutch.

Ensure that you buy the right assemble for the mower model and tighten the component securely before starting the mower and taking it on a test run.

Knowing its integral parts and the proper operational procedures of a blade brake clutch lets you be aware of any signs of breakage, enabling you to make the right decision of either replacing or repairing it.