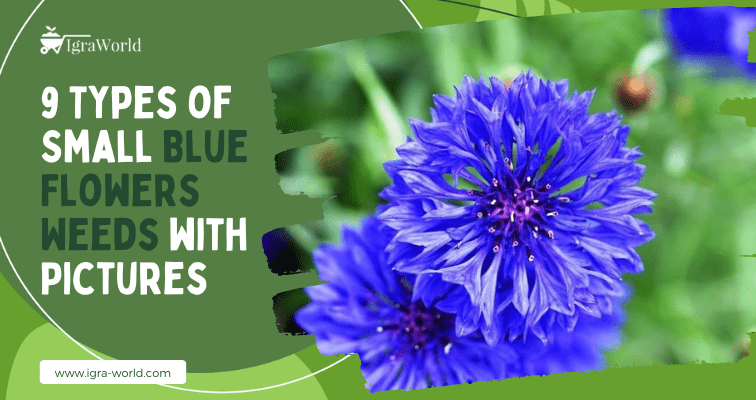 A floral growth that is not wanted and planned/planted is commonly referred to as a weed. Since the beginning of human plant cultivation, weeds have invaded crop-designated regions, forcing humans to chase them off.

Some undesired plants were later discovered to possess qualities that were not initially suspected. And as a result, they were taken under cultivation and removed from the category of weeds.

Other cultivated plants escaped cultivation when they were moved to different climates and turned into weeds or invasive species. Weeds are a constantly evolving category; hence the term itself is ambiguous.

There are numerous ways to suppress or get rid of weeds since they interfere with several human activities. These techniques differ depending on the type of weed, the available disposal tools, and interaction with the environment.

Types Of Weeds With Blue Flowers

This article will give you in-depth information about nine different types of weed plants with blue flowers, how to identify their variety, and how to deal with them to adequately control weeds or replace them with other plants for a local pollinator.

The Siberian Squill is a tiny, low-growing weed that flowers early in the spring and spreads swiftly. Although it does not grow tall, this blue flowering lawn weed spreads quickly.

The flowers bloom almost as soon as the rest of the plant. When the climate is hot and dry, the Siberian squill drops seeds, allowing them to grow again when the temperature falls. Humans, dogs, and cats are all poisoned by this blue wildflower!

This plant’s leaves grow like swords, similar to grass blades. The leaves sprout from the plant’s base, tipping upwards. This growth style makes the blue blossoms visible early in the season. It spreads in spots by remaining low on the turf grass.

Because it self-seeds and spreads via bulbs, this is a difficult weed to eradicate. If you’re an early bird and catch it as a youngling, with gloves, you can dig and pull it out from the very root of it.

In cases where contamination is extensive, using black plastic, layers of cardboard, or any other techniques to cut off its vital growth elements can be beneficial.

Glyphosate should be used as a last option to eliminate any survivors.

The Common Blue Violet has little blooms spreading from fields and growing fast to invade your grass. It may spread by seed and rhizome after it has germinated. Blue Violet grows swiftly in the spring when it is chilly and damp, then turns yellow and dies back in the summer heat. It results in ugly areas on otherwise well-kept grass.

A tiny looking beautiful weed doesn’t grow beyond 6 inches. The leaves and flowers of this weed rise from the base, and the bloom is only as tall as the top leaves.

These weeds are dark green under chilly, damp, and somewhat shady circumstances. When exposed to direct sunlight, heat, and stress, the leaves may become yellowish-green. The blue blossoms create the shape of a star.

Frequent mowing of the grass is the best possible way to keep a check on this type of weed. Hand plucking is viable when the outburst is relatively weak and less in number. You can spot and treat the weeds with a broadleaf herbicide if there is already a considerable infestation.

Tiny Bluets like to cover the ground, staying low and close to the ground, blending with low-cut turf. Tiny Bluets remain active throughout the colder winter season and bloom early into the spring with stems and leaves.

It can easily be mistaken for a tiny grass weed because of the spitting similarity in their looks. It has a minuscule body structure and even smaller leaves. The flowers and the seed pods don’t blossom until as late as the middle of the spring.

Easier said than done and accurate for the Tiny Bluets as they have timid taproots that are highly sensitive and hassle-free to remove. Pluck out any blue-flowered weeds you find in the early spring before they set seed.

This South Asian naturally growing weed has quite the pace and covers the yard rapidly. It propagates through seed and can also develop roots at leaf nodes on damp ground. It causes these weeds to create considerably more challenging to eradicate colonies.

A weed with few pure blue blooms is the Asiatic Dayflower. This blue weed is blue, unlike the remaining blue flowers that are purple or violet. It may grow to be 1 to 3 feet tall and either stand straight or sprawl along the ground. Consisting of 5 dark-leaved leaves, with each of them having a flower stem to it.

Not the easiest to get rid of. It blooms swiftly and roots from the leaves. You may manually pull and eradicate it if it is just starting to grow on your lawn.

The herbicide will be required if there is a considerable infestation. Because this plant is resistant to glyphosate, you’ll need to use a flumioxazin-based pesticide.

This plant resists cold with little blue blooms that grow low. It might start growing if there is a warmer patch during the winters. Henbit blooms and produces seeds in early spring before dying off as the temperature rises. It leaves empty patches on your grass bed and will grow multifold the following season.

The stems of this low-growing plant are square and greenish-purple. Henbit grows prostrate, flat on the ground, with eggshaped leaves on opposing sides. It makes it challenging to locate and renders mowing useless. Growing into a whorl-like formation, they bloom during the earlier days of spring.

When these blue blooms appear in the early spring, manually pick henbit to prevent it from spreading seeds. You can also treat infected areas with a post-emergent herbicide. The easiest way to avoid Henbit is to maintain your lawn thick and avoid over-watering when spring arrives.

This grass plant with tiny blue blossoms can swiftly spread throughout a yard. It is a kind of ground cover that is linked to mint. It grows all year and can become quite well-rooted if left for more than a year. It spreads by rhizomes and can suffocate turf.

Carpetweed is a plant with oval green leaves growing to about 6 inches. It blooms from May to June with spikes in inflorescence flowers. The leaflets of this flower alternate and boast a bright red and purple hue carrying tiny blue flowers.

The ideal time to get rid of this grass weed with blue blooms is during its first year of development. It will uproot quite quickly if you can pull it up by hand during the first growing season. If you missed it and it has grown, you must dig out the entire root and eradicate the weed from your yard.

Oxalis Blue is more likely to overtake a lawn that has been neglected or stressed. It grows low and may be found hiding among white clover and grass until it blooms. This plant spreads swiftly, and each seed pod contains hundreds of seeds. When touched, the seed pods explode and immediately blanket your landscape.

Oxalis Blue has distinctively similar looks to some types of sorrel and clovers, having trifoliate leaves and growing as tall as 4-8 inches. They bloom from summer to fall and produce a vivid blue pea blossom.

This plant, which has blue flowers and is another common lawn weed, is easily removed by hand and ought to be done early in the spring before it blooms. Manual removal requires pulling out the entire root; otherwise, it will regenerate. Blue Oxalis may be avoided by mowing high, watering often, and fertilizing thoroughly.

Columbine Aquilegia is a blue lawn weed that can appear on your turf. It self-seeds and blooms profusely throughout the late spring and summer. The seeds grow in conditions comparable to healthy grass, resulting in a more severe infestation the following spring. When removing these weeds, use caution because their sap might irritate the skin.

A planted flower called aquilegia spreads from a flower bed onto a lawn. It has long, lacey, light green leaves and a strong stem. Each stalk has long, thin branches that point upward. Each branch’s terminal sprouts a bell-shaped bloom that unfurls bluish purple petals.

If only a few blue-blooming lawn weeds appear, you can manually pull them up. If the patch is bigger, it is preferable to mow the tops down before they generate seeds. If you keep them low, they can’t self-seed or procreate.

Creeping Bellflower is a stealthy blue lawn weed reproduced by seed and rhizome. It has horizontal stem rhizomes and deep taproot tubers, making it difficult to eliminate. Each plant may yield 15,000 seeds, providing several generations of weeds to combat.

Creeping Bellflower has a greenish-purple stem that can grow up to 3 feet tall. The leaves are heart-shaped and vivid green, about 4 inches long. The leaves get rounder and smaller as they grow higher up the stalk. The blooms are bell-shaped and sprout from the tips of the stalks. These 5-lobed blooms bloom from June to October and are rich blue.

Because this is a very invasive species, it should be eradicated as soon as possible. Mowing and pruning back might weaken but not kill a mature plant. Herbicides containing glyphosate or dicamba are required to destroy this grass weed. To get rid of the plant, dig down at least 6 inches and remove all tubers and rhizomes. Remove any weed debris from your yard and dispose of it elsewhere.

The presence of weeds in a garden space or elsewhere can have both its pros and cons. A piece of art and aesthetic value in beautification could be an unwanted intruder in other situations. Blue flowered weeds in abundance and at unchecked growth rates can be troublesome.

They can inflict dangers and harm animals and human life around them, raising issues such as blisters and other skin conditions. Here, we have tried to bring to light some of the common blue-flowered weeds.

In short, we can say, “weeds are flowers, too, once we get to know them.”