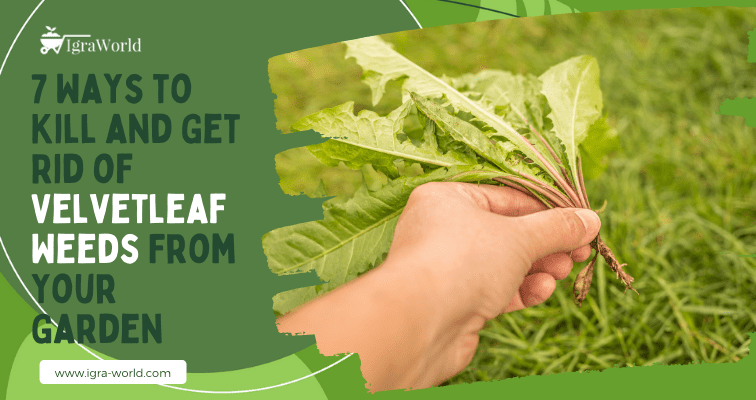 As spring approaches, your garden is bracing itself to bloom with flowers and greens. At the same time, all gardeners are constantly preparing for their never-ending ordeal with weeds.

Weeds can be best described as fierce competitors of growth. Growing up in places you least wanted, they rob away nutrients and water from the soil. Since these soil constituents are imperative for your plants and vegetables to blossom, this deprivation leads to their interrupted, unhealthy growth.

Among a plethora of types that can be a menace in your backyard, velvetleaf weed is one of the most common and dreaded ones. It’s an aggressive annual weed, growing up to 8 feet, and remember, it is often found in soybean fields.

However, you do not have to worry about a potential weed war with the following hacks. We shall list the most efficient ways to kill and get rid of velvetleaf.

First, let’s understand why gardeners should eliminate velvetleaf weeds from their lawns.

The best ways of getting rid of Velvetleaf include uprooting them, putting a weed barrier, scalding, using vinegar, planning your planting, using salt or herbicides.

For getting rid of velvetleaf weeds, you can go organic by uprooting them, putting weed barriers, etc., or you can use inorganic methods, like using herbicides, which are easily available in the market.

Velvetleaf’s Impact and How to Identify them in Your Garden?

You can quickly identify velvetleaf from the look and feel, which is also how it gets its name. The leaves and stems are velvety in touch and appearance with large, heart-shaped leaves. Attached to the stem, these leaves emit a particular odor when crushed. Moreover, though pleasing to the eye, its flowers are yellow with five petals.

Their fast multiplication owes to the fact that one plant can produce 9000 seeds capable of surviving in the soil for long periods.

Weeds can look harmless but silently, they cause a lot of trouble and damage to your garden’s overall condition.

What is problematic about velvetleaf (apart from it robbing nutrients) is that they can choke out your existing plants and act as hosts for plant diseases and pests. Albeit prevention is desirable, it is barely possible with their seeds’ survival rate and modes of transfer.

7 Ways to Get Rid of Velvetleaf Weeds

Having hacks at your disposal for removing or killing velvetleaf remains the most viable option for gardeners. Here are the ways:

#1. Begin With The Advent

Keep an eye out in May and June, which is the time velvetleaf begins to appear in farms and gardens. As soon as you see the signs of growth, start uprooting them.

Young weeds have smaller roots, making weeding easier for gardeners. You will be able to extirpate the roots and even the entire plant quickly. Not to forget, wet soil after rain makes the process even smoother.

Weeding can get tedious and requires strength, but this hack is still a gardener’s favorite owing to its cost-effectiveness and non-requirement of fancy equipment.

If the weeds have started flowering, you can mow them with a grass catcher to gather ripe seeds along. Their roots are likely to have been deeply meshed at this stage, and force can prove to be weak. In such a case moistening the soil to loosen their hold can help to some extent but will require intervention by other methods.

Pro Tip: Dispose of the clippings in the garbage or eradicate them completely. Keep in mind, putting them in the compost pile risks their regrowth.

Also Read: How to Keep Weeds out of Garden?

Who thought your used cardboard, newspapers, old shower curtains, or even black plastic could be of use for killing weeds? If you do not want to buy landscape fabric or a ready-made barrier, adequate alternatives are right in your homes!

Weeds, like all plants, require sunlight and air to survive. By covering the garden soil with a layer of the materials mentioned above, you can successfully block out the sunlight and oxygen supply and suffocate the weeds. The roots will struggle to penetrate through the coverings and eventually smother away.

Keep adding layers of mulch to fasten the process of getting rid of velvetleaf weed. Using eco-friendly materials like newspapers will be ideal as they eventually compost into and enrich the soil.

Remember to leave holes around your plant stems to prevent collateral damage! In simple words, put the materials only in places where weeds have grown, or you think they are most likely to.

The next time you are boiling pasta or potatoes, don’t drain the water down your sink. Instead, drain it in your garden.

Scalding is cheap, eco-friendly, and effectively removes weeds from the root. An added benefit is that it damages the shoot and seeds, too, preventing any potential regrowth in the future. What’s more, shallow roots will die in a single round, but the harder ones can require multiple applications.

Always be extra cautious not to splash this water mixture elsewhere as it may kill any plant that comes in contact, and you definitely do not want to spoil your flowers and veggies. Hence, pour the water a few inches above the infested plant to avoid accidental splashing.

Thankfully, there are organic alternatives to chemically induced herbicides. For example, the basic white vinegar contains about 5% of acetic acid that is strong enough to destroy velvetleaf seeds and growing weeds plants that murder your garden by the day.

The solution should penetrate well into the roots, so pour accordingly. Avoid dropping it directly from the vinegar bottle and instead, use a spray bottle or pump sprayer. Like other herbicides, vinegar cannot distinguish between weeds and other plants. To avoid contaminating your desired plants, put vinegar directly to the velvetleaf with utmost care.

An industrial version of vinegar has around 20% acetic acid, which is quite harmful to the skin, eyes, and soil. While it destroys and burns the weed completely, the side effects (of improper application) might not be worth the gains.

Lawn owners who smartly space out their garden can diminish the possibility of growing weeds, thus saving the backbreaking and long-term hassle of having to kill them.

In between two plant rows, grow and shade more plants all over the garden. Simply don’t give velvetleaf the space to spread out by not leaving any empty row. If you have an ornamental garden, this technique should be your mantra for avoiding velvetleaf weed.

To top it off, DIY gardeners can also plant flowers like Emerald Blue Moss that cover the ground and block sunlight while retaining nutrients.

You will, however, need well-draining soil to have your plants close together. In the long run, you also save the time and effort for weeding if you can avoid velvetleaf altogether.

You May Also Read: Lawn Weeds: How to Deal with Them in Your Garden

Watering the weeds with a diluted salt solution is another efficient and cheap way to kill your garden’s unwanted guests. The solution changes the water balance in weed cells, which dehydrates and kills them.

Initially, begin with a 3:1 ratio of water and salt. Observe the results and gradually increase the strength if required.

A big reason behind the technique not being so popular is its side effects – it does not only kill the weed! Even a slight overdose can render the soil infertile and barren for growing anything. The best way to apply it is using a funnel in areas where you have your plants, by aiming the saltwater directly onto the weeds.

Sprinkle some salt powder into the periphery of your plot and even in soil cracks to see reduced velvetleaf weed growth in your backyard.

When all else fails, chemical herbicides have to be your last resort to clear your beautiful lawn of velvetleaf weed. A few such herbicides kill selectively such that only the weeds from your garden are removed, and there’s no harm to your flower beds or shrubs.

After mixing the herbicide with water, gardeners must spray the solution in a scattered manner across their backyard. To prevent velvetleaf from relapsing, spray the herbicide right at the roots. Eventually, you will notice the weeds have died out, allowing you to remove them manually.

Glyphosate is an effective herbicide that works by spreading from the weeds’ leaves to roots. Available in a variety of forms like liquid, solids, and ready-to-use products, they gradually decompose in the soil.

Note: Glyphosate works only on developing weeds, so you cannot use it as a preventive measure.

Unfortunately, there is no once-and-done solution for the menace caused by velvetleaf weeds. Consistent action is the only way to keep your garden’s growth under control. Keeping these weeds at bay or preventing them altogether becomes way more manageable with the hacks mentioned above.

Don’t forget, combining two of the given techniques could be another hack in itself if you want to witness faster results. But remember to read about the pros and cons of any technique you may be applying to avert any side effects in your beloved backyard.